There’s been drama, suspense, comedy, 3-D, even a silent film to open the prestigious New York Film Festival and this year, for the 54th annual event, add a first: a feature documentary. The world premiere of Golden Globe-nominee for best director (Selma; 2015 Oscar Best Picture nominee) Ava DuVernay’s The 13th, chronicling racial inequality in the U.S. and the U.S.’s high rate of African-American incarceration, will be the Opening Night attraction.

The NYFF runs September 30 – October 16 on the campus of the Film Society of Lincoln Center [Walter Reade Theatre and the Eleanor Bunin Munroe Film Center] and Alice Tully Hall.

Ms. DuVernay will be on hand at the first night gala for a Q&A. The 13th debuts on Netflix and plays limited theatrical engagements beginning October 7.

“This is a true honor for me and my collaborators,” says DuVernay, the first African American female director to be nominated for a Golden Globe. “This film was made as an answer to my own questions about how and why we have become the most incarcerated nation in the world. It examines how and why we as this great nation regard some of our citizens as innately criminal, and how and why good people allow this injustice to happen generation after generation.

DuVernay described making the doc, which members of the Selection Committee term “extraordinary and galvanizing” as an eye-opening experience. “I’m a prison abolitionist, because the prison system is not working. It’s horrible.”

The title refers to the 13th Amendment to the Constitution — “Neither slavery nor involuntary servitude, except as a punishment for crime whereof the party shall have been duly convicted, shall exist within the United States . . . ”

NYFF director and Selection Committee chair Kent Jones, notes, “The progression from that second qualifying clause to the horrors of mass incarceration is laid out by DuVernay with bracing lucidity. The distinction between documentary and fiction gives way and you experience something so rare: direct contact between the artist and right now, this very moment. Ava redefines the terms on which we discuss where we’re at, how we got here, and where we’re going. The 13th is not only a great film, it’s also an act of true patriotism.”

“Film school was a privilege I couldn’t afford,” she says. To learn her craft, DuVernay came up the ranks as a film publicist. She made her feature film debut with the 2008 doc This in the Life, about the 90s L.A. hip-hop movement, which she followed with TV music docs. Her first narrative feature film, 2010’s I Will Follow won the African-American Film Critics Association award for best screenplay. DuVernay’s 2012 Middle of Nowhere  captured the Best Director Prize at Sundance, making her the first African-American woman to receive the award. She states, “I tell the stories that are of interest to me.”

Bening, in what’s being hailed as one of her very best performances, portrays a single mother raising her teenage son (newcomer Lucas Jade Zumann) in a sprawling Bohemian house, shared by an itinerant carpenter (Crudup) and a punk artist with a Bowie haircut (Gerwig), and frequented by her son’s rebellious friend (Fanning).

“I was taken aback by 20th Century Women,” says Jones. “It’s made with unusual level of craft and attention to detail, human and visual, which is now all but extinct in film. Mills and his remarkable cast approach the level of the uncanny – with all the shared behaviors and worries, the divisions, the look and feel and smell of the world as it was.”

“It’s exciting to premiere my film in the city where I discovered I wanted to be a writer and director, “ notes Mills, “and at the festival where I saw so many films that inspired me and showed me the way.”

20th Century Women will be released in December.

This “emotionally and visually resplendent epic” tells the story of Lieutenant Colonel Percy Fawcett, the British military-man-turned-explorer whose search for a lost city deep in the Amazon grows into a feverish, decades-long  obsession that takes a toll on his reputation, his wife  and children. Charlie Hunnan, Sienna Miller, Robert Pattinson, and Tom Holland co-star. Cinematographer Darius Khondji is receiving acclaim for his artistry “which captures quite a spell, exquisitely pitched between rapture and dizzying terror.”

“Gray is one of our finest filmmakers,” states Jones. “The Lost City of Z represents a form of epic storytelling that’s all but vanished from modern cinema, and a rare level of artistry. Each of his movies is so beautifully wrought, visually and emotionally, but this one represents something new. It’s a true epic, spanning two continents and three decades, and a genuine vision of the search for sublimity.” 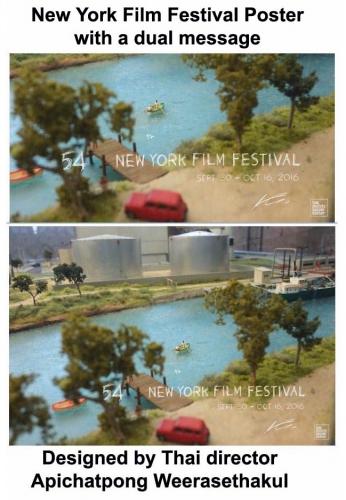 NYFS receives year-round support from American Airlines, The New York Times, HBO, The Kobal Collection, Variety, Loews Regency Hotel, Row NYC Hotel, the National Endowment for the Arts, and the N.Y. State Council on the Arts. Support for the NYFF is provided by Jaeger-LeCoultre, the Mayor’s Office of Media and Entertainment, and the N.Y. Public Library for the Performing Arts.

Tickets for the 54th New York Film Festival go on sale September 11. Becoming a Film Society Member at the Film Buff Level or above provides early ticket access to screenings and events ahead of the general public, along with discounts. Visit www.filmlinc.org/membership.

For more information about the New York Film Festival, visit www.filmlinc.org/NYFF. For  news, subscribe to the NYFF newsletter, follow the festival on FB and Twitter, and use the hashtag: #NYFF.