This year marks the 25th anniversary of the Walter Reade. To celebrate this milestone, there’s been a total renovation that will help keep the theatre at the forefront of film-exhibition technology. There’ll be a full restoration of the lobby, a new screen and upgrades to lighting, sound, and electrical systems.  There’ll be new 4K digital projectors, with a new window cut to allow showing 16mm.

The Main Slate line-up from the Opening Night attraction, Ava DuVernay’s  documentary The 13th; to the Centerpiece, writer-director Mike Mills’ 20th Century Women (A24 Films); and Closing Night finale, James Gray’s The Lost City of Z (Paramount Pictures/MICA Entertainment), is only the tip of the iceberg.

Starting September 30, just step up to the NYFF box offices at Alice Tully Hall to purchase tickets to one of the most outstanding lineups in years. There’ll be choices galore, with more world and North American premieres than ever, to appeal to every taste. Festival events include Convergence, Projections, Retrospective, Revivals, Spotlight on Documentary, panels, and a series of “Meet the Makers” conversations with Convergence storytellers.

Kent Jones, NYFF director and chair of the Selection Committee Chair, says, “The cinema is so many things at once. It’s a form of response. The directors  are sounding alarms or proclaiming the urgency of self-realization. In this year’s lineup, there’s a bounty of vital work from global artists who won’t stop until they see their visions to the end.”

Throughout the 17 days and nights, there’ll be Q&As with the creatives and stars at all Tully and many Reade screenings as well as special events – some of which will be free on a first come/first served basis. 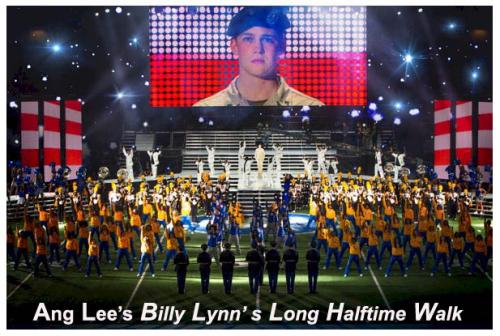 In the more, more, more category, audiences will get a jump on a highly anticipated film: the world premiere of Oscar-winner Ang Lee’s Billy Lynn’s Long Halftime Walk (TriStar Pictures, Studio 8), adapted by Jean-Christophe Castelli from the acclaimed best-seller by Ben Fountain about the state of America in the aftermath of the 2003 invasion of Iraq, on October 14 at AMC’s Lincoln Square Theatre.

Lee has a long history with the Festival. Most recently, his Oscar-winning Life of Pi was Opening Night of NYFF50 in 2012. His 1997 film The Ice Storm opened NYFF35, and Crouching Tiger, Hidden Dragon was Closing Night of the 38th festival in 2000.

“The New York Film Festival has been an important event for me as a New Yorker and a filmmaker,” says Lee. “I’m honored to be represented on this unique platform. With each film, I learn fresh ways to connect with audiences and with myself. Since Life of Pi, I’ve been working with my team towards a new cinematic approach that I hope will revitalize that connection.”

The film stars newcomer Joe Alwyn, Kristen Stewart, Vin Diesel, Steve Martin, Chris Tucker, and Garrett Hedlund. Lee sees Billy Lynn as “a giant step forward in the art of cinema, made with a cinematographic process years ahead of its time.” It’s the first full-length narrative film shot in 4K — 3D at the ultra high rate of 120 frames-per-second. The NYFF world premiere will mark the first time.

“But,” explains Lee, “technology is merely a tool in service of artistic expression, to make it strong and fresh, because story and drama matter most. Billy’s journey, which is intimate and epic and told almost entirely from his point of view, lent itself particularly well to the emotion and intensity that this new approach fosters.”

Revivals, showcasing masterpieces from renowned filmmakers whose diverse and eclectic works have been digitally remastered, restored, and preserved, will have  a 25th anniversary screening of Disney’s “visually lavish and musically exuberant” animated Beauty and the Beast, September 18 in Tully.

In September 1991, two months before its release, Beauty and the Beast was screened as a “Work in Progress” at the 29th NYFF. Even though a third of the presentation consisted of storyboard art and B&W animation tests, the screening garnered a standing ovation. On release, as one of the first Disney features to incorporate CGI with hand-drawn animation, it became an instant classic. It achieved landmark status as the first animated film to garner a Best Picture Oscar nomination [it won Best Score and Original Song].

The series also salutes one Tavernier’s favorite American directors, Henry Hathaway, with 12 films released by 20th Century-Fox and Paramount. They including The Dark Corner (1946), film noir about a private eye and his secretary (Mark Stevens, Lucille Ball, who clashed with Hathaway) attempting to clear him of murder; Kiss of Death (1947), classic shot in NY about a jewel thief (Victor Mature) targeted by the mob when he sings to the DA, with a terrifying performance by Richard Widmark as a psychopathic killer; Fourteen Hours (1951), low-budget film shot in lower Manhattan, based on the story of  a 1938 jumper from a hotel ledge (Richard Basehart), that features formidable character performances from Grace Kelly, Agnes Moorehead, Ossie Davis, Brian Keith, and John Cassavetes; and Garden of Evil (USA/Mexico, 1951) with Gary Cooper, Richard Widmark, and Cameron Mitchell as gold hunters approached by a desperate woman (Susan Hayward) for help finding her husband, trapped in their gold mine [shot on location in Tepotzotlán and jungles near Acapulco; score by Bernard Herrmann].

The series will also feature the boisterous Technicolor epic, The Shepherd of the Hills (1941), based on Harold Bell Wright’s renowned novel about warring Ozark families and benign stranger who appears in their midst, stars John Wayne, Harry Carey, and Ward Bond; Rawhide (1951), much-copied Western “nail-biter” starring Tyrone Power, Susan Hayward, and master character actor Dean Jagger [huge influence on Elvis during making of King Creole] [later, basis for Clint Eastwood TV series]; and Niagara (1953),tight, psychological thriller about crimes of passion, co-written by Billy Wilder, shot in deep Technicolor against Niagara Falls, starring Joseph Cotton, Marilyn Monroe, Jean Peters, and former tenor/dancer Richard Allan. [“Fox head Daryl Zanuck was convinced Monroe was a passing phenomenon,” said Hathaway, “in the role that made her a star. Sadly, she didn’t know how good as she was.”]; and North to Alaska (1960), with John Wayne prospecting for gold, supported by Capucine, then singing-idol Fabian, Ernie Kovaks, and former M-G-M swashbuckler Stewart Granger in probably his best performance.

The Festival’s Projections, October 7-9,a collaboration with the curated V-O-Dservice MUBI, showcases classic and award-winning films. It’s comprised of 44 innovative  international short, medium, and feature-length film and video works films from Argentina, Bosnia-Herzegovina, Brazil, Canada, France, Germany, Jamaica, Japan, Lebanon, Montenegro, Portugal, Spain, Switzerland, Tunisia, Serbia, the U.K., and U.S. in 11 programs with 10 world premieres, five North American premieres, and 13 U.S. premieres that draw on innovative, experimental modes and techniques that expand our notions of what the moving image can do and be.”

Screening on celluloid will be 20 works (15 on 16mm; five on 35mm), including a restoration of avant-garde luminary Robert Beavers’s From the Notebook of… (1971/1998); three historical films, preserved by the Academy Film Archive, by Canadian filmmaker David Rimmer; and the late Peter Hutton’s  In Titan’s Goblet.

Projections, screening digitally at the Bunin Munroe Film Center [unless otherwise noted], tickets are $15; $10 for FSLC members, students, and seniors, with a $99 All Access Pass available. Purchase and find additional information at filmlinc.org/NYFF.

The Convergence section, October 1–4, will delve into the world of immersive storytelling via nine interactive experiences, featuring virtual reality, augmented reality, installations, and more—including two World Premieres and one U.S. Premiere. Selections include Sound Hunters, where users record the sounds of their world via an app, mixing and remixing their own electronic music compositions; the U.S. premiere of the thrilling audience-directed heist film Late Shift; and, back by popular demand, the hyper-collaborative Sherlock Holmes & The Internet of Things, in which participants assume the role of the famed detective to solve mysterious crimes across Lincoln Center.

Tickets for the 54th NYFF go on sale September 11. Becoming a Film Society member at the Film Buff Level or above provides early access to screenings and events, along with ticket discounts. Learn more at filmlinc.org/membership.