Not a cabaret production by any means, Feinstein’s/54 Below saw a packed house on July 11th as songs made famous by the Muppets were given rousing new twists by the most effervescent of performers, simultaneously reminding avid fans as to why Kermit, Miss Piggy and the whole gang could pull at heartstrings while causing tears of joy.

When it was time to play the music and light the lights, musical director Ben Caplan’s band gave an energetic rendition of the theme from The Muppet Show. The players (Caplan, Wesley Zurick, Carl Howell, Josh Plotner, Lloyd Kikoler and Alfonse Vetere), lent vocals and energy to the entire set, and would easily make Dr. Teeth and The Electric Mayhem proud. Host Griffin Newman provided more than your average introductions to musical and comedy acts; whether he was bantering with 54’s own Statler and Waldorf situated in the back of the house for hilarious heckling action, or paying homage to Kermit with his arms flapping to squeaky “Yays!,” he imbibed the show with much of its Muppet-y Easter eggs of fun.

Acts included Molly Pope’s (Found)zany “Can You Picture That?” and Max Crumm’s (Disaster!) deep croon on “I’ll Get You What You Want.” No Muppet event would be complete without Aladdin’sJames Monroe Iglehart, a self-professed Muppet junkie (who also sported a Muppet tee for his performances). Iglehart and Brian Gonzales (Aladdin) channeled their inner Rowlf and Kermit for “I Hope That Somethin’ Better Comes Along,” truly making the song their own with their contagious charm. The hecklers (Drew Johnston and Noah Forman) truly did want to see something better come along- but it was a hard act to follow. Luckily, Lesli Margherita (Dames at Sea)demonstrated the many ways in which she emulates the sassiness of reigning diva Miss Piggy, as she brought down the house with her gut-popping antics throughout “The Christmas Queen.” This was not a problem for her (as she delightfully shared with her audience), because “Every single role that I do has been influenced by Miss Piggy.”

Other standout acts included a performance by the Skivvies, whose adorable rendition of “Movin’ Right Along” included everything from a big fork in the road to Big Bird, while donning their trademark skimpy nods to Kermit and Fozzie. Stephanie D’Abruzzo (Avenue Q) dedicated her emotional performances of “Little Things” and “Imagination” to puppeteer friends that are no longer with us. One could have heard a pin drop as her strong, breathtaking vocals resounded in an Acappella version of “Imagination.” Fellow Avenue Q cast members Jennifer Barnhart and Rick Lyon also represented Broadway’s favorite foulmouthed, Tony award-winning puppets. Lyon’s love for Jim Henson, with whom he worked for a few years, was clearly evident in his affecting performance of “Bein’ Green,” complete with a Kermit that he personally designed as a tribute to his mentor. 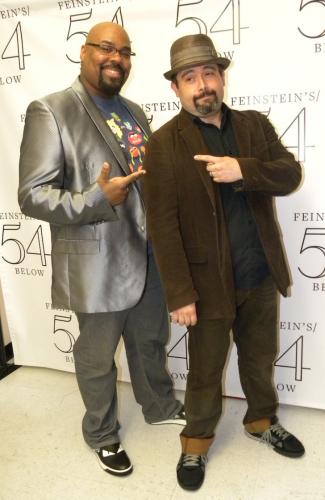 Mara Wilson revealed her vocal chops with “I Don’t Want to Live On the Moon,” accompanied by an ASL translator that made her performance as poignant as it was pretty. The child-actress is clearly meant to begin the next phase of her career by sharing her talents with the New York theater community. Audiences were also treated to a rare ballad from Iglehart, who returned to the stage with “I’m Going to Go Back There Someday.” It may be hard to imagine a person injecting more heart into the lyrics than Gonzo did in The Muppet Movie,but Iglehart’s raw emotion and tenderness brought the room to its knees with the song’s reflective lyrics and his thoughtful, genuine rasp: “There’s not a word yet for old friends who’ve just met…”

In a feat that simply astounded the audience with its originality and intricacies, Grace McLean (Natasha, Pierre and the Great Comet of 1812) looped jazz and payed homage to the Muppets with Dr. Teeth and the Electric Mayhem’s “Don’t Blame the Dynamite.” As the night came to a close, Gonzales returned to the stage with George Salazar (Godspell) to aid one another in identifying as “Man or Muppet,” in a brilliantly passionate, comedic take on one of the Muppets’ newer gems.

Though the hecklers were looking for Lin-Manuel Miranda, they still got an excellent treat. The comedy acts that posed as interludes fell a bit flat, but the phenomenal musicians and cleverly written Muppety-bits dispersed throughout the evening left audiences riveted. With a finale featuring Kermit, Lyons and the entire cast in a special delivery of “The Rainbow Connection,” it was clear that this Muppet extravaganza was a bonafide hit; even Statler and Waldorf would give it their approval. 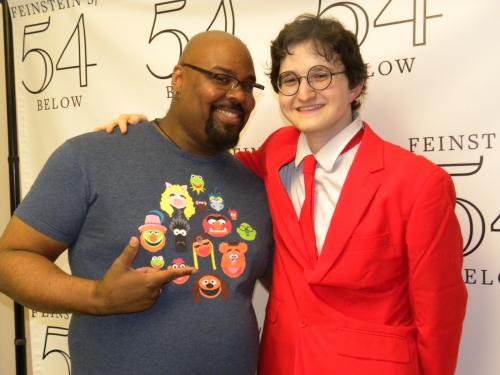 54 Celebrates the Muppets will return to Feinstein’s/54 Below on August 28th. http://54below.com/muppets