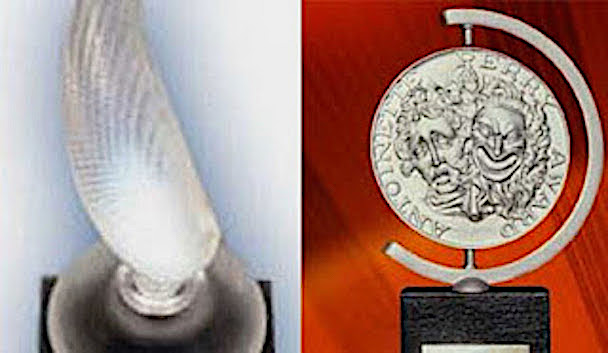 The Tony will be presented on June 12. The DDs will announced their winners this coming week of June 6 (the date has not been given out as of yet) and presented in a ceremony at Sardi’s restaurant. Having just caught up with Funny Girl last week, I was finally able to cast my ballot for both awards. Here are my predictions and where applicable, my preferences for the winners.

As noted above, Lehman Trilogy is not eligible for the Drama Desks, but it will probably sweep the Tonys as it did the OCCs, where it won six awards including Best Play, Director, Actor and three design categories. For the Drama Desks, there are no Broadway plays nominated (I would have preferred The Minutes at least be included.) So this will one of the rare times, the DD has awarded Best Play to a non-Broadway show. In the over 40 years since the Drama Desk began given out Best Play awards, they have only done it seven times. The rare past exceptions are Admissions (2018), Tribes (2012), Ruined (2009), Wit (1999), How I Learned to Drive (1997), Marvin’s Room (1992), and A Lie of the Mind (1986). If my prediction comes true, the playwright Joshua Harmon will have the rare distinction of winning the Best Play DD Award twice for an Off-Broadway play. He is the author of both Admissions and Prayer for the French Republic.

Michael R. Jackson’s A Strange Loop has received the most Tony nominations this year with 11, but racking the most noms is not always an indicator of taking home the big prize. Loop covers the unconventional subject matter of a black, gay musical theater writer and includes some pretty graphic material. However, there was such a backlash at the last Tonys when Slave Play, a work by Jeremy O. Harris, an African-American author, was skunked after receiving the most nominations for a straight play ever, that there might be a Strange Loop sweep in response to fears of Tony voters being accused of racism. But, if the box office trumps social qualms, the voters might go the safe route and chose the commercially popular Six as might the DDs. Six is the only Broadway nominated for the DDs so the odds in favor of an Off show like Kimberly Akimbo winning. But the DDs have only presented an Off-Broadway tuner with their big honor three times: Little Shop of Horrors (1983), Hamilton (2015), and A Strange Loop (2020) during its Off-Broadway run at Playwrights Horizons.

Best Revival of a Play:

Tony: Take Me Out

Drama Desk: How I Learned to Drive

My preference: Tony and DD: How I Learned to Drive

Best Revival of a Musical:

My preference: Tony and DD: Caroline, or Change

Best Actor in a Play:

Rarely does a closed show have a Tony sweep, but Lehman will probably take several categories since the still-running competition is not strong this year. The entire cast of three (Simon Russell Beale, Adam Godley and Adrian Lester) are nominated for Best Actor and would usually cancel each other out, but I think Beale’s extraordinary limning of so many different parts, male and female, will give him the edge over his castmates (who also enacted multiple roles). Beale was not deemed eligible for the DDs, so Jesse Tyler Ferguson of Take Me Out, who is considered a Featured Actor by the Tonys (and will probably win there), is the likely winner among the Drama Desk voters because his show is the only one still running.

Best Actress in a Play:

For some weird reason, LaChanze isn’t even nominated for a Drama Desk despite her stunning performance as a black actress fighting for her dignity on 1950s Broadway in Alice Childress’ Trouble in Mind. Among the Drama Desk nominees, the only one still running is Ruth Negga in Sam Gold’s weird-ass head-scratcher of a Scottish Play revival. I preferred Phylicia Rashad’s iron-willed factory worker in Skeleton Crew. She is considered a Featured Actress by the Tonys.

Best Actor in a Musical:

Mrs. Doubtfire was shabbily treated by the critics and had to close, not once, but twice–first because of COVID and then because of poor box office and only one Tony nod–for Rob McClure who deserves as many awards as possible for his versatile and hilarious turn. It could easily have been a Robin Williams impersonation, but McClure made it his own. Billy Crystal will probably be honored for a more commercially successful screen-to-stage show, Mr. Saturday Night. Jacquel Spivey of A Strange Loop might sneak in. He won the Outer Critics Circle Award, but he’s missed several performances and that could count against him with voters in both groups.

Best Actress in a Musical:

Even though her show has closed, Sharon D. Clarke’s volcanic Broadway debut after decades on the London stage deserves the award. Victoria Clark might snatch the Drama Desk for her teenager in a elderly body in Kimberly Akimbo. She’ll be the front-runner for a 2023 Tony when the show transfers next fall.

Best Featured Actor in a Play:

My preference: Same for both

As noted above, Ferguson is nominated as a leading actor for the Drama Desk (despite the fact that they considered Denis O’Hare a featured actor in the original production).

Best Featured Actress in a Play:

Drama Desk: Kenita R. Miller,  for colored girls who have considered suicide/when the rainbow is enuf

My preference: Same for both

Best Featured Actor in a Musical:

Best Featured Actress in a Musical:

Best Director of a Play:

For the Drama Desks, all the nominees’ shows have closed. English is the most recent one.

Best Director of a Musical: