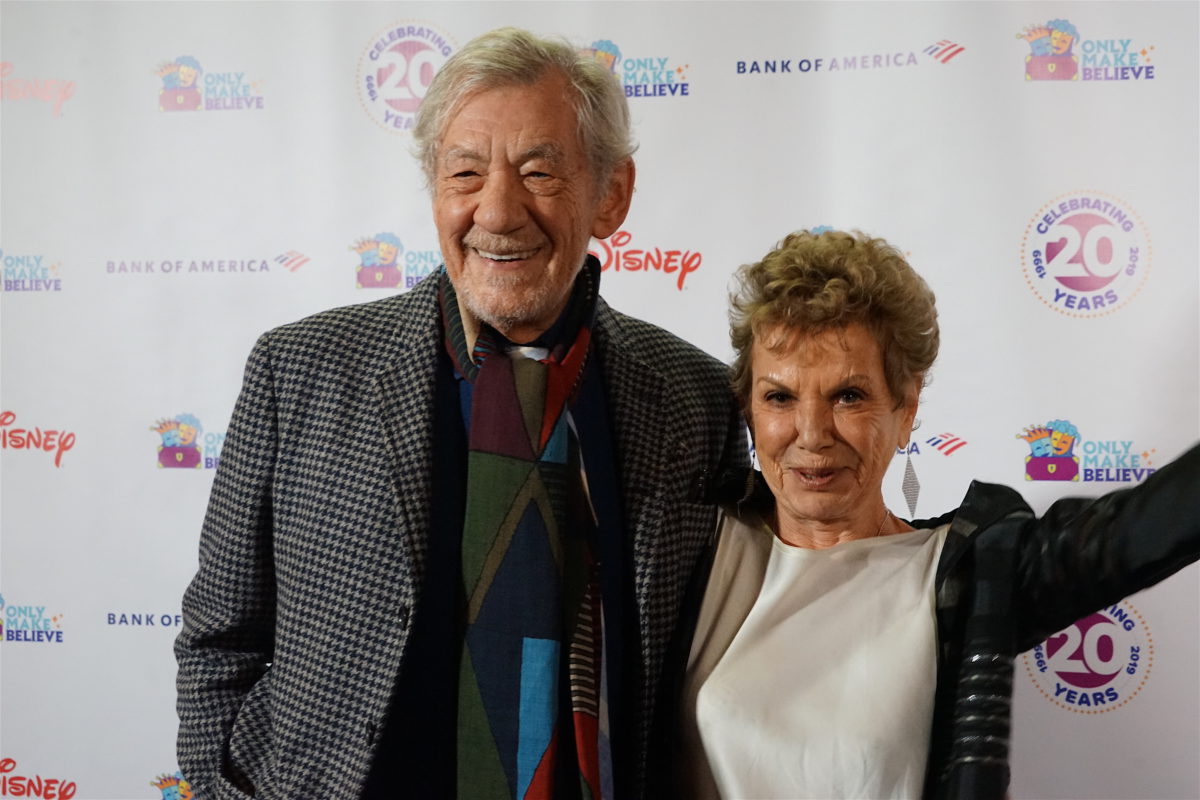 The non-profit organization, which brings the magic of theater to chronically ill and disabled children throughout the New York and Washington D.C. metropolitan areas, was founded by Dena Hammerstein in 1999 and saw its first gala Off-Broadway soon thereafter; Sir Ian McKellen recalled working with the organization in its first year, and reflected on the integral impact it has had on children in its twenty years.

“How many shows have even been on Broadway for that long?” he said, laughing with Theaterlife before the gala. “Only Make Believe brings a little bit of Broadway and a little bit of joy and fun into the lives of kids who are not well, trying to get better while in long-stay hospitals. The performers from Only Make Believe help. Their doctors say that they get better quicker, they help the parents, and it even helps the nurses who see the kids laughing and shouting and having a bit of fun.”

McKellen recalled first having an affinity for playing Make Believe when he was 3 years old after having seen a production of Peter Pan outside of London. “I have been acting for an awfully long time, but it all started with that show,” he said.

Directed by Joe DiPietro, the Only Make Believe gala also served as a reminder of the magic of performance. Brad Oscar (Mrs. Doubtfire) returned to the stage for his ninth time, delivering his rendition of “Betrayed,” a number he performed in The Producers when he simultaneously started working with Only Make Believe twenty years ago. Oklahoma!’s Denver Milord opened the show with “Oh, What a Beautiful Mornin’,”Euan Morton donned his crown from his role as King George III in Hamilton for “You’ll Be Back,” and The Book of Mormon’s Dave Thomas Brown and Cody Jamison Strand brought laughter with “You and Me (But Mostly Me).”

Guests were also treated to a mystifying act from Big Apple Circus’ Alan Pagnota and Rafael Ferreira. Kathryn Allison shared a rendition of “Come Rain or Come Shine,” which was followed by a finale in which Orfeh and Andy Karl (both of Pretty Woman: The Musical) brought down the house with a medley of hits from their album, Legally Bound, including “You’re All I Need to Get By” and “Ain’t No Mountain High Enough.”

McKellen presented the Sir Ian McKellen Award to Ambassador Theatre Group, the theater company that, in addition to providing support for Only Make Believe, allowed him to close his one-man show in London for two nights; McKellen will also be performing Ian McKellen On Stage: With Tolkien, Shakesperare, Others…And You! at the Hudson Theatre on November 5th, with all proceeds benefiting Only Make Believe.

“Only Make Believe’s mission is such a simple idea, that I wish it were spread across the world, not just across the states,” he said. “I wish it would come to my country. It’s such a simple and productive way of theater getting together with its dearest audiences.”

For more information about Only Make Believe visit www.OnlyMakeBelieve.org.