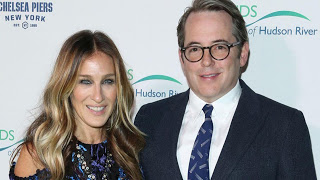 September 15, 2019: Creative casting distinguishes two new Broadway productions. Matthew Broderick and Sarah Jessica Parker are not the first two stars that come to mind when thinking of leads for Neil Simon’s 1968 three-part comedy Plaza Suite. The real-life couple are comedic talents but they’re not exactly versatile. The play, consisting of three one-acts set in the same suite in NYC’s swankiest hotel, features six very different people. I can see the Brodericks as the second set of visitors–a shallow Hollywood producer and his high-school sweetheart–and maybe even the third–the crazed parents of a bride who refuses to leave the bathroom on her wedding day. But that’s a stretch. I’m having trouble envisioning them as the first couple, an estranged middled-aged pair on the brink of splitting up. It’s not that they couldn’t play these roles. It’s just hard for me to imagine them as late middle-aged (even though they really are) and sad. I also wonder if they will be updating the script since it is chock full of late 1960s references modern audiences might not get (Anybody remember Metracal? It was a diet drink and got a laugh back then.) When I directed a production for an Equity showcase in Brooklyn, we changed all the movie stars’ names in the second piece and increased all the prices of the wedding expenses the father constantly spouts in the third. John Benjamin Hickey makes his Broadway directorial debut of this revival which opens at the Hudson Theatre on April 13.

Company will definitely be going through some changes in the re-imagined version set for March 22 at the Bernard Jacobs Theatre. This Sondheim revival from London staged by Tony winner Marianne Elliot (The Curious Incident of the Dog in the Night-Time, War Horse) reverses the genders of several roles, including the lead, unmarried Bobbie (here she is Bobbi). The three girlfriends become male and the about-to-married couple who sing “Getting Married Today” are two gay men. Katrina Lenk (The Band’s Visit) is Bobbi and Patti LuPone will repeat her triumphant London performance as the caustic Joanne who stops the show with “The Ladies Who Lunch.”

Also coming from London is the massive Lehman Trilogy, the hit history of the banking family, which played the Park Avenue Amory last season. Simon Russell Beale, Adam Godley and Ben Miles will repeat their performances as all the characters when the huge production moves to the Nederlander for a limited run opening March 26.

The highly-anticipated revival of Edward Albee’s Who’s Afraid of Virginia Woolf? has gone through some changes. Eddie Izzard had to drop out due to scheduling conflicts. The role of the harassed professor George will be taken by Rupert Everett, last seen on Broadway in a revival of Blithe Spirit opposite Angela Lansbury. Laurie Metcalf, Russell Tovey, and Patsy Ferran are still in the cast, directed by Joe Mantello who helmed Lucas Hnath’s Hillary and Clinton and Albee’s Three Tall Women, both with Metcalf. An official opening of April 2 has been set at a Shubert theater to be announced.

Speaking of Angela Lansbury, she will also be returning to Broadway, but only for one performance as Lady Bracknell–an ideal role–in The Importance of Being Earnest. The event is a staged reading on Nov. 18 at the American Airlines Theater to benefit the Roundabout Theater Company.

Here is an updated list of upcoming Broadway and Off-Broadway productions through 2019-20 and beyond.

Oct. 22–for colored girls who have considered suicide/when the rainbow is enuf (Public Theater)

Nov. 19–The Illusionists: Magic of the Season (Neil Simon)