Just like last year the Tony and Drama Desk Awards are going to be very different. In 2017, Dear Evan Hansen and Natasha, Pierre, and the Great Comet of 1812 dominated the Tonys, but were ineligible for the Drama Desks because they were in the running for 2016 because of their earlier Off-Broadway runs. The Tonys are only for Broadway shows and the Drama Desks include on and Off. 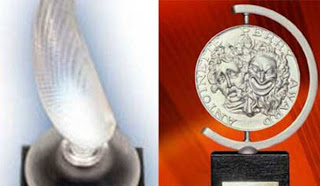 Just like last year the Tony and Drama Desk Awards are going to be very different. In 2017, Dear Evan Hansen and Natasha, Pierre, and the Great Comet of 1812 dominated the Tonys, but were ineligible for the Drama Desks because they were in the running for 2016 because of their earlier Off-Broadway runs. The Tonys are only for Broadway shows and the Drama Desks include on and Off. Usually the DDs and Tonys results are pretty similar because the DD voters tend to go for Broadway shows. (The Tonys are voted on by 841 industry insiders including producers, directors, designers, actors, stage managers and a few critics who belong to the New York Drama Critics Circle, while the Drama Desks are voted on by about 100 theater reviewers, editors and reporters.) This year, The Band’s Visit is the likely Tony champ, but it played Off-Broadway at the Atlantic Theatre Company last season, taking home several 2017 DD Awards as well as the New York Drama Critics Circle Award for Best Musical. In addition, several Broadway performers and creative personnel who received Tony love are absent from the DD list, particularly Lauren Ambrose and Norbert Leo Butz of My Fair Lady (the seven-member DD nominating committee didn’t seem to like Bartlett Sher’s Lincoln Center revival of the Lerner and Loewe classic.) Ambrose won the Outer Critics Circle Award for Outstanding Actress in a Musical for her scrappy Eliza Doolittle and Butz took the OCC Best Featured Actor in a Musical for his boisterous Alfred Doolittle. Harry Hadden-Patten’s Henry Higgins is in the running for both a DD and a Tony.

Here are my predications for both awards. The Drama Desks will be presented on June 3 and the Tonys the following week on June 10.

Best Play
Tony: Harry Potter and the Cursed Child, Parts One and Two
Drama Desk: Admissions
Harry Potter isn’t even nominated for the top DD play category. In fact, all of the DD outstanding play candidates are Off-Broadway shows. This will be one of the few times the DD award goes to a non-Broadway show. In the over 40 years since the Drama Desk began given out Best Play awards, they have only done it six times. The rare past exceptions are Tribes (2012), Ruined (2009), Wit (1999), How I Learned to Drive (1997), Marvin’s Room (1992), and A Lie of the Mind (1986).

The Band’s Visit is the favorite to take the top Tony prize, but since it is absent from the Drama Desk field, that accolade’s final destination is not a certain thing. The only Broadway musicals the DD has nominated are SpongeBob Squarepants and Mean Girls. The Off-Broadway nominees are the short-lived K-Pop and Old Stock, and the York Theater’s Desperate Measures which is scheduled to re-open in a commercial Off-Broadway run at New World Stages. Mean Girls has my Drama Desk vote–I thought it was a delightful expansion of the movie–but I have a feeling Spongebob will be the ultimate winner as it was at the Outer Critics Circle Awards. The OCC divides its Best Play and Musical Awards between Broadway and Off-Broadway. Their Outstanding Broadway Musical was SpongeBob and Off-Broadway it was Desperate Measures, a wild west remake of Shakespeare’s Measure for Measure. Several DD members thought it was wonderful, but I found it average. In the absence of a huge Broadway favorite, DD voters could go the non-traditional route and award Desperate the big award. The award has only gone to an Off-Broadway show twice before: Hamilton (2015) and Little Shop of Horrors (1983).

Best Musical Revival
Tony: My Fair Lady
Drama Desk: Carousel
The DD nominating committee was not as crazy about Lady as the Tonys. The show reaped 5 DD noms and 10 for the Tonys. Everyone seems to have forgotten about Once on This Island, innovatively reimagined by Michael Arden (who didn’t even get a DD nomination for Outstanding Director). If Arden was DD nominated he would have my vote, and I will vote for him for the Tonys.

Best Actress in a Play
Tony and Drama Desk: Glenda Jackson, Three Tall Women
When an 82-year-old British legend returns to Broadway after a 30-year absence and a career in Parliament, of course she’s going to win every award going. It doesn’t hurt that her performance as the crotchety matriarch A in Albee’s Pulitzer Prize winning play is magnificent. Interesting side note: many award presenters mistakenly just assumed Jackson is a Dame of the British Empire. She corrected the Outer Critics Circle on this point after she was introduced as one at their award ceremony: “I am not a dame and the Outer Critics Circle does not have the power to make me one. Only the Queen can do that.”

Best Actor in a Musical
Tony: Tony Shalhoub, The Band’s Visit
Drama Desk: Ethan Slater, Spongbob Squarepants
This category is wide open with no surefire winner and the two groups could split or agree. Tony Shalhoub could take home the Tony as part of a Band’s Visit tidal wave. Ethan Slater has already won an Outer Critics Circle Award for his athletic performance in the title role of Spongebob. Tony-DD nominees Joshua Henry of Carousel and Harry Hadden-Paton of My Fair Lady also have their advocates. I have a feeling the DD voters will go for Slater, following the OCC lead, though Henry and Hadden-Patton gave more complex performances.

Best Actress in a Musical
Tony: Katrina Lenk, The Band’s Visit
Drama Desk: Jessie Mueller, Carousel
Lenk is not eligible for the DD because of Band’s Off-Broadway run last season, but she will probably win the Tony for her seductive, sad cafe owner. Mueller will take the DD for her updated Julie Jourdan. Lauren Ambrose of My Fair Lady is not nominated for the DD, but she won the Outer Critics Circle Award. If she were up for the DD, I would vote for her, but evidently the DD nominating committee was not enchanted.

Best Featured Actor in a Play
Tony, Drama Desk: Nathan Lane, Angels in America
Though he has won two previous Tonys and five Drama Desks, Lane will add another pair of prizes to his trophy shelf for his searing portray of Roy Cohn, the closeted, demonic power broker in Tony Kushner’s two-part classic. Ron Leibman won Best Actor Tony and Drama Desk Awards for Part One for the same role.

Best Featured Actress in a Play
Tony: Denise Gough, Angels in America
Drama Desk: Jamie Brewer, Amy and the Orphans
Gough will win the Tony for her pill-popping Harper Pitt in Angels, but she is not nominated for the same performance for the DD. She is in the DD Best Actress race for a stunning performance in People, Places and Things which played the Off-Broadway St. Ann’s Warehouse earlier this season before Angels opened on Broadway. As a result, the Desk Award in this category will probably go to Jamie Brewer, an actress with Down’s Syndrome playing a similarly afflicted character in Lindsey Ferrentino’s Off-Broadway play.

Best Featured Actor in a Musical
Tony: Norbert Leo Butz, My Fair Lady
Drama Desk: Gavin Lee, SpongeBob Squarepants
Once again, the DD snubbed a My Fair Lady cast member who is a strong Tony candidate. Butz will win his third Tony for his boisterous Alfred P. Doolittle and he has already won the Outer Critics Circle Award, but did not receive a DD nod. Gavin Lee will probably take the DD for his eight-legged tap dance as Squidward J. Tentacles, Spongebob’s grouchy neighbor and co-worker at the Krusty Krab. I am voting for Grey Henson, the gay best friend who nearly steals Mean Girls.

Best Featured Actress in a Musical
Tony, Drama Desk: Lindsay Mendez, Carousel
Audra McDonald won the same two awards for her Broadway debut as Carrie Pipperidge in the last revival of Rodgers and Hammerstein’s classic (1994) and it looks like Lindsay Mendez will repeat the feat for the same role. Mendez has already won the OCC Award.

Best Score
Tony: David Yazbeck, The Band’s Visit
Drama Desk: Music: David Friedman, Desperate Measures; Lyrics: Nell Benjamin, Mean Girls
The Drama Desk splits its musical score award between the music and lyrics, so it’s possible for two different shows to be honored. The Tonys will go for The Band’s Visit and the DDs will share the wealth between Desperate Measures and Mean Girls.