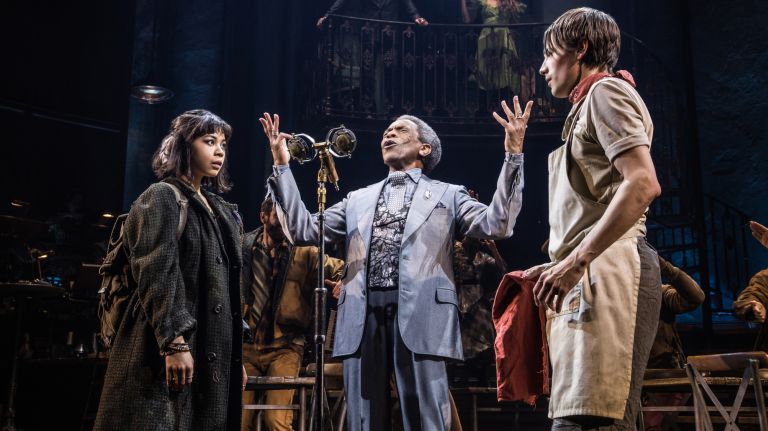 This year, the prime example is Hadestown which played Off-Broadway at the New York Theater Workshop in 2016, had a London staging and now is at the Walter Kerr. The Outer Critics Circle, which gives out separate awards for Outstanding Play and Musical for on and Off-Broadway and considers both for everything else, judged the modern adaptation of the Orpheus and Eurydice myth different enough to be under consideration in all categories, winning Broadway Musical, Score, Director of a Musical and Featured Actor and Actress. The Drama Desk has deemed Hadestown eligible only in categories which feature new work for the Broadway production, so new cast members, Rachel Chavkin’s direction and design elements are eligible, but not Anais Mitchell’s score and book. The New York Drama Critics Circle membership was divided on the question of the show’s eligibility and had a vote by email to determine its status. The result was a tie and Hadestown was deemed ineligible.

Here are my predictions for both Tony and DD awards and my own choices (I vote for both) where they vary with who I think will win.

Musical:
Tony: Hadestown
Drama Desk: Tootsie
My choice for both: The Prom
As noted, Hadestown is not eligible for the Drama Desk, but is up for 14 Tonys and is the frontrunner for the top prize. The show’s modern setting and its subtle anti-Trump message will appeal to liberal Tony voters. For the DD, Tootsie has been hailed as updating and improving on the 1982 Dustin Hoffman film comedy upon which it is based. It’s not just another carbon copy of a hit film with songs inserted and has surpassed The Prom, my favorite of the season, in hype and buzz.

Play:
Tony and Drama Desk: The Ferryman by Jez Butterworth
A three-hour import from London about the Irish troubles chock full of adultery, murder, symbolism, senile aunts and uncles, little kids, and live animals–it’s a shoo-in for every award going.

Musical Revival
Tony: Oklahoma!
Drama Desk: Fiddler on the Roof in Yiddish
My choice for both: Oklahoma!

There are only two nominees in this category for the Tonys–the sexed-up reconstruction of Oklahoma! and an only slightly altered and woke version of Kiss Me, Kate!Though some audiences have groused at director Daniel Fish’s dark alterations in Rodgers and Hammerstein’s sunny classic, it will take the 50-50 Tony bet. The DDs will go for the Off-Broadway transfer of Joel Grey’s more traditional take on Fiddler in a Yiddish adaptation.

Actor in a Musical:
Tony and Drama Desk: Santino Fontana, Tootsie.
He’s my choice for both awards, too. Fontana is equally convincing as the perfectionist actor Michael Dorsey and his female alter ego, Dorothy Michaels.

Actress in a Musical:
Tony and Drama Desk: Stephanie J. Block, The Cher Show
My choice for both: Beth Leavel, The Prom

Actor in a Play:
Tony: Bryan Cranston, Network (with an outside possibility for Jeff Daniels, To Kill a Mockingbird)
Drama Desk: Raul Esparza, The Resistible Rise of Arturo Ui
In a rare move, the Drama Desk Nominating Committee declined to include a single Broadway performance in this category despite lauded work by Cranston and Tracey Letts in All My Sons (who was also snubbed by the Tonys.) Cranston has won the OCC for his blazing interpretation of Howard Beale, the mad-as-hell news anchor in Ivo van Hove and Lee Hall’s stage version of Paddy Chayefsky’s 1976 film classic and is the favorite to take the Tony. Jeff Daniels has an outside chance of pulling an upset since Mockingbird is a smash hit, grossing more than any other straight play in Broadway history, and to make up the play’s omission from the Best Play field. The probable Drama Desk winner and my choice, is Raul Esparza for his raw-edged performance as a Hitlerian gangster in John Doyle’s revival of Brecht’s Arturo Ui at Classic Stage Company.

Actress in a Play:
Tony and Drama Desk: Elaine May, The Waverly Gallery

The 87-year-old May delivered a brilliant rendition of a once-vital woman coping with Alzheimer’s disease, returning to the Broadway stage for the first time in 50 years since she cracked up audiences with her then-comedy partner Mike Nichols. Ironically, Waverly provided a similar vehicle for Eileen Heckart in its original Off-Broadway production in 2000. She won Obie, Drama Desk and Outer Critics Circle awards but was ineligible for the Tony.

Featured Actor in a Musical:
Tony and Drama Desk: Andre De Shields, Hadestown
My choice for Tony: Ephraim Sykes, Ain’t Too Proud: The Life and Times of the Temptations
My choice for Drama Desk: Patrick Vaill, Oklahoma!
The 73-year-old Andre De Shields was not in the Off-Broadway production of Hadestown, so he is eligible for both Tony and DD awards and has won the OCC prize. After several decades in the business and two previous Tony nominations and five for the DD, he is a shoo-in as the sly narrator Hermes. My Tony vote went to Ephraim Sykes as David Ruffin, the most troubled of the Temptations. For the DDs, I went for Patrick Vaill as the tormented Judd in Oklahoma! (not nominated for the Tonys).

Featured Actress in a Musical:
Tony and Drama Desk: Ali Stroker, Oklahoma!
This is a pretty tight category for both awards with stand-out work from Sarah Stiles as the neurotic girlfriend in Tootsie (DD, Tony), Leslie Kritzer as the whacky life coach in Beetlejuice (DD), Stephanie Hsu as the eccentric high-school student in Be More Chill (DD), and Mary Testa as the flinty Aunt Eller in Oklahoma! (DD, Tony). Amber Gray as the fun-loving goddess Persephone was in the original Off-Broadway Hadestown, so she is not eligible for the Drama Desk, but she could be part of a Hadestown sweep at the Tonys. But I hope my choice for both accolades, Ali Stroker will make history as the first Tony and Drama Desk acting winner in a wheelchair for her boisterous Ado Annie in Oklahoma!

Featured Actor in a Play:
Tony: Benjamin Walker, All My Sons
Drama Desk: Brandon Uranowitz, Burn This! (Prediction and my choice)
My choice for Tony: Bertie Carvell, INK
Bertie Carvel as the monstrous media mogul Rupert Murdoch in INK should win every award available, but he is not nominated for the Drama Desk and he will probably lose the Tony to the more obviously emotional and histrionic performance of Benjamin Walker as the betrayed war veteran in All My Sons, the winner of the Outer Critics Circle prize. In a bizarre twist, Walker was shut out of the Drama Desks, though his castmate Hampton Fluker is in the running for a smaller role as Walker’s conflicted former friend. Since my first choice Carvel is not on the Drama Desk slate, I voted for Brandon Uranowitz as the caustic gay roommate in Burn This.
Featured Actress in a Play:
Tony and Drama Desk: Celia Keenan-Bolger, To Kill a Mockingbird
My choice for both: Ruth Wilson, King Lear

Celia Keenan-Bolger as Scout, the child-narrator of To Kill a Mockingbird, is the glue that holds the production together, and she will probably add a Tony and DD to her OCC for the role. But I preferred Ruth Wilson’s dual turn as the stoic Cordelia and a hilarious and wise Fool in the Glenda Jackson King Lear.

Director of a Musical:
Tony and Drama Desk: Rachel Chavkin, Hadestown
My choice for both: Daniel Fish, Oklahoma!
Rachel Chavkin significantly altered her staging for Hadestown between Off-Broadway and Broadway so she is in the running for the Drama Desks and will probably take both prizes. I’m rooting for Daniel Fish’s radical rethinking of Oklahoma!

Director of a Play:
Tony: Bartlett Sher, To Kill a Mockingbird
Drama Desk: Sam Mendes, The Ferryman
My choice for both: Ivo van Hove, Network

Choreography:
Tony and Drama Desk: Warren Carlyle, Kiss Me, Kate!
Carlyle’s imaginative and exciting dances are just too darn hot and are my choice for both Tony and DDs.

Originally Posted on The David Desk 2 on Saturday June 1, 2019