Usually the results of the Tony and Drama Desk Awards are pretty much the same, even though the Tonys are only for Broadway shows and the DDs combine on and Off-Broadway. The 120 or so DD voters, a group of theater critics, reporters, and editors, usually vote for Broadway with occasional departures for Off-Broadway hits such as Hamilton when it played the Public. 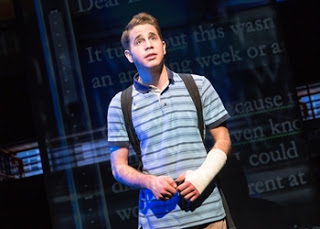 Dear Evan Hansen with Ben Platt will clean up at the Tonys, but is ineligible for Drama Desks. Credit: Matthew Murphy

Usually the results of the Tony and Drama Desk Awards are pretty much the same, even though the Tonys are only for Broadway shows and the DDs combine on and Off-Broadway. The 120 or so DD voters, a group of theater critics, reporters, and editors, usually vote for Broadway with occasional departures for Off-Broadway hits such as Hamilton when it played the Public. The 868 Tony electorate consists of the members of the Broadway League (the producers’ organization), the American Theatre Wing, boards of directors of various professional unions and guilds such as Actors Equity and the Society for Stage Directors and Choreographers, and the members of the New York Drama Critics Circle (full disclosure: I am member and so also a Tony voter as well as a Drama Desk voter).

This year the two theater accolades may vary somewhat because many Tony-eligible shows have won or been nominated for Drama Desk Awards for previous seasons when they played Off-Broadway. These include Dear Evan Hansen and Natasha, Pierre, and the Great Comet of 1812. Plus the Drama Desk nominating Committee (seven DD members) didn’t seem to like Groundhog Day very much–they gave it one major nomination for lead actor Andy Karl–while the Tonys have nominated the show for seven awards. Here are my predictions for both awards, indicating where I think they will vary. The Drama Desks will be held on June 4 and the Tonys are handed out the following week on June 11:

As noted earlier, Evan Hansen is not eligible for the DDs since it was in the running last season when it played Off-Broadway at Second Stage, but it wasn’t even nominated for the top musical award which went to Shuffle Along. (The Tony went to Hamilton which had won the DD the year before for its Off-Broadway run at the Public–one of the few times the Best Musical DD went to an off-Broadway show. Little Shop of Horrors was the only other instance.) Anyway, I think Hansen’s heartfelt themes of teen loneliness will defeat its nearest Tony competitor Groundhog Day which is not even nominated in the top slot for the DDs. Their top musical award will go to Broadway’s Come from Away and not the Off-Broadway The Band’s Visit, arriving on Broadway next season when the cycle will repeat itself. My votes are Evan Hansen for Tonys and The Band’s Visit for DD.

ACTOR IN A MUSICAL
Tony: Ben Platt, Dear Evan Hansen
Drama Desk: Andy Karl, Groundhoug Day
As noted above, Ben Platt of Hansen is not eligible for the Drama Desks (He was not even nominated last year). But momentum has built for his brilliant portrayal of the alienated lead character. His performances on TV shows such as Stephen Colbert’s Late Show has increased his profile. Karl has won the Olivier Award for Groundhog‘s London version and has earned trooper points for soldiering on after a serious ankle injury just before opening night. He’ll definitely take the DD, though he show has no other nominations from the critics’ group.

The Divine Miss M is not campaigning for any awards, but that only matters with the Oscars and the Golden Globes. Tony voters don’t really care if candidates show up at cocktail parties or press events. Midler has already won the Outer Critics Circle Award (and she showed up for the ceremony, delivering a funny acceptance speech. “You’ve already reviewed the show, so I don’t give s shit,” she cracked.)

ACTOR IN A PLAY
Tony and Drama Desk: Kevin Kline, Present Laughter
Like Midler, Kline is not pounding the pavement for a Tony win–he has two already for On the 20th Century and The Pirates of Penzance as well as a DD for his Falstaff in Henry IV–but both stars are around 70 and starring in physically demanding roles. So they get a pass.

ACTRESS IN A PLAY
Tony and Drama Desk: Laurie Metcalf, A Doll’s House Part 2
Producers of the Ibsen sequel are campaigning heavily with full-page ads in the Times and Metcalf is long overdue for award recognition after three nominations.

FEATURED ACTRESS IN A MUSICAL
Tony: Rachel Bay Jones, Dear Evan Hansen
Drama Desk: Jenn Collela, Come from Away
Another split category thanks to the Evan Hansen situation. Jones, who gives a stand-out performance as Evan’s struggling mother, was nominated for the DD last season but lost to Jane Krakowski in She Loves Me. Collella who won the Outer Critics Circle and has the only solo in the ensemble-based Come from Away will benefit from Jones’ absence at the DDs.

FEATURED ACTOR IN A PLAY
Tony and Drama Desk: Danny DeVito, The Price
Though I voted for Justice Smith for his electrically-charged performance as the feral teenager in the Off-Broadway Yen for the Drama Desks, DeVito’s scene-stealing furniture dealer in Roundabout’s Broadway revival of Arthur Miller’s 1968 drama will probably take both awards.

Nixon and Laura Linney alternate in the roles of Regina and Birdie in Lillian Hellman’s 1939 Southern barn-burner of a melodrama but Tony voters (along with the DD and OCC electorate) are supposed to consider the configuration on opening night which was Linney’s Regina for Leading Actress and Nixon’s Birdie for Featured. Both actresses have won the Outer Critics Circle awards and their double duty may have influenced the outcome. Plus Tony voters have been invited back to see the stars in switched roles. Nixon brings an added dimension of self-awareness to the alcoholic Birdie.

DIRECTOR, MUSICAL
Tony: Michael Greif, Dear Evan Hansen
Drama Desk: Christopher Ashley, Come from Away
Greif will benefit from an Evan Hansen sweep at the Tonys, while Ashley will receive a piece of the DD love for Come from Away, though it could go to Rachel Chavkin for her Broadway restaging of Natasha, Pierre, which is eligible for the DD because it’s different from the three previous Off-Broadway editions. I’m voting for Matthew Warchus for the Tonys for his innovative and clever direction of Groundhog Day and for David Cromer’s intimate production of The Band’s Visit for the DDs since Warchus isn’t even nominated for the latter.

CHOREOGRAPHY
Tony: Andy Blankenbuehler, Bandstand
Drama Desk: Warren Carlyle, Hello, Dolly!
Carlyle was not nominated for the Tony because his work was judged largely based on Gower Champion’s original choreography. However, the DD nominating felt differently.

REVIVAL, MUSICAL
Tony and Drama Desk: Hello, Dolly!
This is not a hard guess since the Jerry Herman show is such a huge success. However, for the DDs, I voted for the immersive Off-Broadway production of Sweeney Todd set in a London pie shop, which also won the Off-Broadway-only Lortel Award. But many DD voters were invited because of the limited number of seats. Sunday in the Park with George also would have been in running for both Tonys and DDs, but the producers elected to take it out of competition, siting its brief run and not wanting to give up seats for paying customers to comped award voters.

REVIVAL, PLAY
Tony and Drama Desk: Jitney
Though its limited run has ended, the August Wilson revival from Manhattan Theatre Club, was highly praised and will probably win both awards, though Little Foxes which is still playing and also an MTC production, might sneak in.