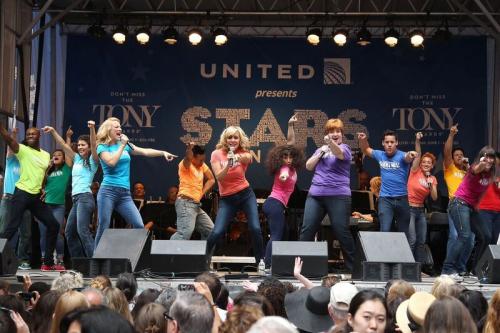 To add to the festivities leading up to the Tony Awards®, the free outdoor concert in the heart of the Theatre District will celebrate Broadway with star appearances and exciting performances from over 30 new shows and long-running favorites, accompanied by a 12-piece live orchestra.

“Broadway has never had a bigger variety of offerings.  With more shows participating in this concert than ever before, it is even more apparent that our goal of having something for everyone on Broadway is succeeding,” says Charlotte St. Martin, President of the Broadway League. “No wonder we are breaking attendance records again! Join us in celebrating one of Broadway’s most exciting seasons as we count down to the 70th annual Tony Awards.”

“Stars in the Alley showcases the excitement of musical theatre and the vibrancy of Times Square all at once.  The opportunity to help bring great live music that is free to the public is the primary goal of the MPTF,” says Dan Beck Trustee, Music Performance Trust Fund.

An American in Paris

On Your Feet! The Story of Emilio & Gloria Estefan

WITH ADDITIONAL APPEARANCES FROM*:

An Act of God

The Curious Incident of the Dog in the Night-Time

School of Rock The Musical

Shuffle Along, Or The Making of the Musical Sensation of 1921 and All That Followed.

The event is produced by The Broadway League. United Airlines is the title sponsor of Stars in the Alley® and is the official airline of The Broadway League and the Tony Awards. Live music sponsored by The Recording Industry’s Music Performance Trust Fund and Film Funds. The official hospitality partner is Junior’s Restaurant. The official media partner is The New York Times. Additional support is provided by The Shubert Organization and SL Green Reality Corporation.
Photos: Kristina Bumphrey 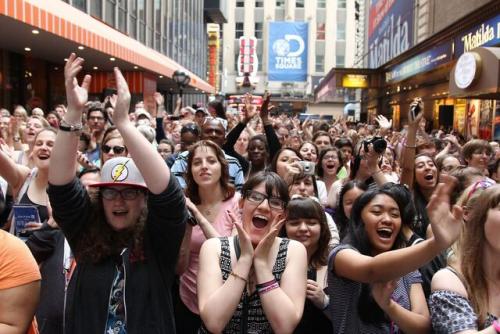