He doesn’t come on until the last few innings and his team has been flagging with a few walks but not many solid base hits.  Director Jack O’Brien has not given them the proper pacing for this frantic 1928 farce of foul-mouthed scandal-sheet scribblers
cracking wise and chasing scoops in corrupt Chicago. This comes as a surprise
since O’Brien is such an adept hand at large-scale ensemble pieces such as the
musical Hairspray, the conflation of two Henry IV plays, the
three-evening Coast of Utopia, and a London stage adaptation of His
Girl Friday, the 1940 movie version of Front Page which transformed
the original into a romantic comedy by switching the lead character’s gender to
female.

That central relationship is between ace reporter
Hildy Johnson (John Slattery of Mad Men fame) and his ruthless
“anything-for-a-story” editor Walter Burns. Just as Johnson is about to chuck
his ink-stained-wretch status for a well-scrubbed fiancee (the charming Halley
Feiffer) and a cushy New York job in advertising, Burns pulls him back for the
biggest byline ever, covering the escape of unlikely convicted cop killer Earl
Williams (rabbit-like John Magaro).

Hecht and MacArthur based this knockabout romp on
their own raw experiences as newspapermen with two dozen denizens of the sleazy
side of the fourth estate and various hangers-on trouncing through the
courthouse press room (appropriately squalid set by Douglas Schmidt). Burns
enters late in the action and is meant to be a capper to the mad media circus.
But, in the current staging, the preceding one hour and 45 minutes is only
intermittently rollicking and Lane delivers a much needed jolt with his amazing
timing, phrasing, and reactions. (Watch his body slump as he attempts to move a
huge roller-top desk or his face contort into a galaxy of horrified disgust at
a hack writer’s poetic drivel.)

As Hildy, a game John Slattery anchors the action
for much of the show and valiantly attempts to keep up with Lane, but pales
once his co-star steps onto the field. The remainder of the large company is
perfectly acceptable but rarely reaches Lane’s Olympic level antics. Those who
come closest are Dann Florek as a pompous, platitude-spouting mayor, Micah
Stock as a dim-bulb cop on a psychology kick, and Jefferson Mays as that
would-be rhymester, a fussy proto-Felix Ungar, prissily spraying disinfectant.
Sherie Rene Scott achieves some genuine pathos as the proverbial hooker with a
heart of gold and Robert Morse earns guffaws in the cameo role of a nebbishy
messenger. Lewis J. Stadlen and Dylan Baker register the strongest among the
crowd of Hildy’s fellow newshounds. John Goodman goes for Foghorn Leghorn
cartoonishness as a goofy, good-ole boy sheriff. They’re a strong team, but
Lane is unquestionably a star among stars. 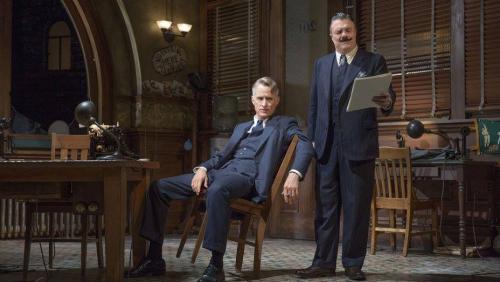