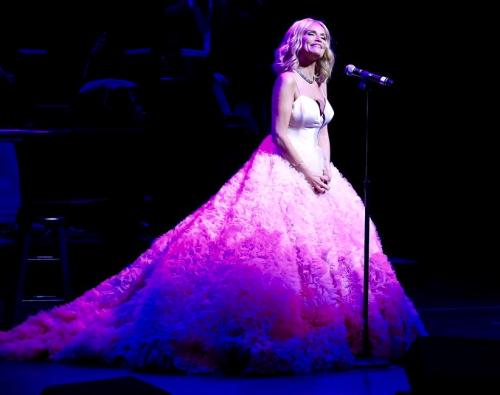 A captivating solo concert, “My Love Letter to Broadway,” at the Lunt Fontanne Theatre through Nov. 13 is an eclectic selection of songs and personal reminiscences.

Tony and Emmy award winner Kristin Chenoweth is a Broadway star from Broken Arrow, Oklahoma, an adorable mashup of contradictions, a bubbly blond with a powerhouse voice in a diminutive 4’11” frame, a glamorous diva and a hilarious self-deprecating comedian, who happens to be a staunch LGBTQ activist and a devout Christian. She’s got a bright legit opera voice and a deliriously entertaining down to earth style. And she commanded the stage at the Lunt-Fontanne Theatre with the ease and intimacy of a veteran performer having a great time living large. The evening she said was a dream come true, and those in attendance were blessed as well.

The show blends showtunes, standards, pop, country and gospel into a uniquely captivating evening that is as original as the Star herself.  Dressed in glamorous yet edgy Christian Sirian outfits in shades of fuchsia that accented the Star’s sexy petite figure and legs Chenoweth owned the stage with her playful style and amazing powerhouse pipes.

Elegantly directed by Richard Jay-Alexander, who has directed Chenoweth’s touring appearances in recent years, the show begins with the Star in a pink bathrobe writing a letter to producer James L. Nederlander, giving us her history about being a girl from Broken Arrow, Oklahoma, who dreams of Broadway, while singing “You Made Me Love You.” The robe comes off to reveal the Star in a secquined fuchsia hot-pants romper in which she struts her stuff to “Let Me Entertain You,” from Gypsy. Without hardly skipping a beat she moved effortlessly into a stunning rendition of “I Could Have Danced All Night” from My Fair Lady impressively showing off her celebrated operatic high notes.

She’s accompanied by five terrific musicians led by music director Mary-Mitchell Campbell. A program note from the Star said the show will be different every night. The third performance, which I attended, was indeed different from reports of opening night. Each evening she is joined by a different guest star, and 12 different choirs will share the stage each night as well. Alan Cumming, a dear friend who co-hosted the Tony Awards with her last season, joined her from the audience for some witty banter recalling moments from their friendship over the years, before launching into a spirited “Easy Street.” At Friday’s show the choir from Pace University joined her on two songs. First up was a stirring Jesus song “Upon this Rock,” which the Star quipped “If you’re an atheist this will be over in four minutes.” And her signature song, “Popular” from Wicked was part of the show. This time,  however, the song was turned into a funny parody on The Donald calling the Star for advice.

Chenoweth’s voice is remarkable, supple an controlled. One of the many highlights of the evening was a medley of Willie Nelson’s “You Are Always on My Mind” and Stephen Sondheim’s “Losing My Mind,” which demonstrated her superb skill. Her rendition of “Bring Him Home” from Les Miserables, one of the Star’s favorite shows, soared with haunting authenticity. The selections from her new album, “The Art of Elegance,” were beautiful as well. They included “I Get Along Without You Very Well” and the Burt Bacharach-Hal David standard, “A House is Not a Home,” along with “Smile,” performed as an encore with a depth of feeling that was moving and fresh. Chenoweth enchants with effervescent ease, a soaring soprano with a unique blend of contradictions that keeps you smiling throughout two plus hours of entertainment. 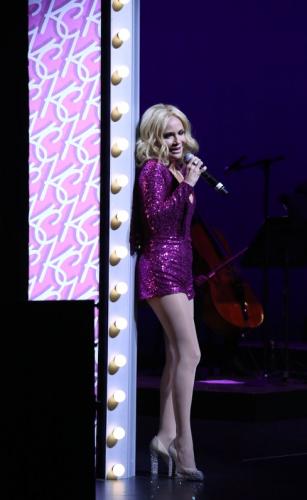