A Bronx Tale, the Broadway show and the safest production under consideration here, is the latest iteration of Chazz Palminteri’s autobiographical solo play about his boyhood attachment to a local mob figure and its affect on his hard-working father. After successful 1989 runs in Los Angeles and Off-Broadway with Palminteri playing his younger self and all the other characters, Robert De Niro made his directorial debut with the 1993 filversion, and played Lorenzo, the father, with Palminteri as Sonny, the neighborhood boss. The movie’s success launched Palminteri’s film acting career, usually limning tough guys, most notably in Woody Allen’s Bullets Over Broadway. The author-star returned to Tale in a 2007 Broadway revival directed by Jerry Zaks.

The show is slick, professional, and enjoyable, with smart staging from Zaks and De Niro (though I suspect Zaks is largely responsible for the musical’s zip, along with Sergio Trujillo’s street-savvy choreography). Palminteri attempts to retain the grittiness and depth of his original script, but it gets drowned in nostalgic musical suds. The score by composer Alan Menken  and lyricist Glenn Slater employs the 1960s sounds of the settings and has some grabby high spots but feels mostly derivative.

In the original, Sonny and Lorenzo emerges as complex figures. The mobster is a brutal killer but also compassionate when young Chazz (his full name is Calogero) reveals he wants to date an African-American girl. The dad is a role model of honesty, rejecting Sonny’s easy money and loose morals, but he intolerantly rejects his son’s reaching across racial lines. In this musical, these rough edges are smoothed over with everybody singing about finding their “heart.”

Despite Cordero’s charismatic performance, or maybe because of it, Sonny’s darkness is totally eclipsed by a sunny—no pun intended—demeanor. This Sonny is a great guy, a romantic crooner, and a “cute”
gangster we root for even as he smashes rivals with a baseball bat. It’s the latest example of stereotyping mob figures in a rosy, admiring aura.

This qualm does not lessen my admiration for Bobby Conte Thornton who as Calogero carries the show on his shoulders with style, sturdy Richard H. Blake as Lorenzo, and spunky Hudson Loverro as the child version of the hero.

While Bronx Tale offers cuddly criminals serving sweet tiramisu, The Band’s Visit at Atlantic Theatre Company is a spicier slice of falafel. Derived from a 2007 Israeli film, this small-scale tuner is intimate and authentic while Bronx Tale is big and broad like a tourist version of reality. When an Egyptian policeman’s band is stranded in an isolated Israeli town for a night, the musicians must rely on the hospitality of the residents. Unexpected connections form as cultures clash and stereotyping breaks down. David Yazbek’s moving songs incorporate an exotic blend of influences rarely heard on or Off-Broadway and David Cromer’s direction has a refreshing verisimilitude. There are dozens of tiny, evocative moments such as an exhausted wife angrily simmering as her husband and father entertain their visitors; two men awaiting calls from their distant sweethearts battling over a pay phone; the band’s romeo offering romantic advice at a rollerskating rink; and the autocratic conductor letting his guard down as the lonely cafe owner sings of her attraction for him.

In the final look at theatrical response to cultural stereotyping, we move from desert realism to abstract symbolism. Suzan-Lori Parks’ singularly titled The Death of the Last Black Man in the Whole Entire World aka The Negro Book of the Dead (1990), at Signature Theatre,takes on the most brutal aspects of prejudice in a nightmarish tone poem populated by race-based figures. Black Man with Watermelon (an intense Daniel J. Watts) dies over and over, by lynching and the electric chair, as his wife Black Woman with Fried Drumstick (a magnificent Roslyn Ruff) perpetually says goodbye and goes into mourning. Their narrative
of sorrow is augmented by a chorus of mythical stock characters with names like Old Man River Jordan, Queen-Then-Pharoah Hatshepsut, and Lots of Grease and Lots of Pork. Director Lileana Blain-Cruz makes this satiric parody into a lively dance-meditation on race and Roslyn Ruff’s emotive acting transforms a symbol into a living, breathing person. In this era of Black Lives Matter and the triumph of Trump, Parks’ angry, mysterious, and challenging work is especially relevant—and dangerously real. 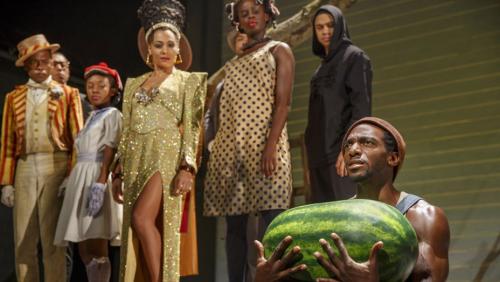