By Patrick Christiano
Hamilton, Lin-Manuel Miranda’s hip-hop musical about America’s first Secretary of the Treasury, was the big winner at The American Theatre Wing’s 20015-2016 annual Tony Awards taking home 11 Tonys including the evening highest honor Best Musical, and winning in every category the musical was nominated except Best Performance by an Actress in a Leading role in a Musical. 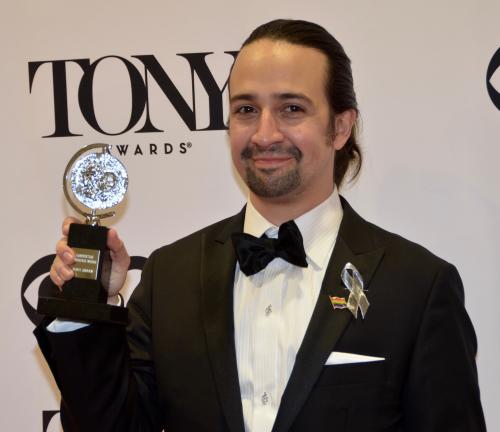 Hamilton, Lin-Manuel Miranda’s hip-hop musical about America’s first Secretary of the Treasury, was the big winner at The American Theatre Wing’s 20015-2016 annual Tony Awards taking home 11 Tonys including the evening highest honor Best Musical, and winning in every category the musical was nominated except Best Performance by an Actress in a Leading role in a Musical. That honor went to the favorite, London actress Cynthia Erivo, making her Broadway debut in the revival of The Color Purple, which also won the award for Best Revival of a Musical.

Hamilton, a cultural phenomenon, uses an ethnic cast to paly what would traditionally be white roles is sold out well into next year. The show was a big hit at The Public before moving to Broadway this season. The 11 awards for Hamilton was one short of the record 12 won by The Producers in 2001.

The joy at the awards ceremony was undermined by a shooting rampage at a gay nightclub in Orlando, Florida that left 49 dead and more than 50 seriously wounded less than 24 hours earlier. The Tony Awards and CBS, which broadcast the evening live from the Beacon Theater, dedicated the event to all those affected by the tragedy. Presenters and performers arrived at the Red Carpet wearing silver ribbons created by William Ivey Long, a Tony Award winning designer, as an acknowledgment to the Orlando massacre.

At the top of the show host, James Corden, commented on the brutality by saying “our hearts go out to all of those affected by this atrocity” adding “Hate will never win…Tonight’s show stands as a symbol and a celebration of that principal.”  And Lin-Manuel Miranda, Hamilton’s creator, said accepting his Tony for best score “Senseless acts of tragedy remind us that nothing here is promised – not one day,” before launching into a poem that ended with “Love cannot be killed or swept aside.”

Although Hamilton dominated the evening, a revival of The Color Purple, a musical adaptation of the Pulitzer Prize winning novel by Alice Walker, won two awards for best musical revival, and for best leading actress for its London star, Cynthia Erivo, while The Humans, a touching family drama by Stephen Karam, won four awards. They were best play, best featured actress for Jayne Houdyshell and best featured actor for Reed Birney, two longtime theatrical veterans, for their moving portrayal of a married couple, as well  David Zinn win for his design of a two-story apartment in the Chinatown.

The production of Arthur Miller’s “A View From the Bridge” won the awards for best play revival and for best director for Ivo van Hove, a Belgian director making his Broadway debut.

Jessica Lange, the Oscar-winning actress, won a Tony for her portrayal of the morphine-addicted Mary Tyrone in Eugene O’Neill’s Long Day’s Journey into Night, while Frank Langella took home his fourth Tony Award for his portrayal of a man struggling with dementia in The Father. In his poignant acceptance speech referring to the tragedy in Orlando, Langella said “We have three choices. We can let events define us, destroy us, or strengthen us.”

The best musical award was given to Hamilton’s Lin-Manuel Miranda by Barbra Streisand, who has not appeared on Broadway since 1964 when she created the role of Fanny Brice in Funny Girl.

Along with the 24 competitive awards Tonys are given out in several noncompetitive categories each year. This year they included a lifetime achievement award to the lyricist Sheldon Harnick, best known for “Fiddler on the Roof,” and the director Marshall W. Mason, the founding artistic director of the Circle Repertory Company. An annual award honoring a regional theater went to the Paper Mill Playhouse in Millburn, N.J., and the Isabelle Stevenson award to the performer Brian Stokes Mitchell for his work with the Actors Fund.

Best Revival of a Musical: “The Color Purple”

Best Revival of a Play: “Arthur Miller’s A View from the Bridge”

Best Lead Actor in a Play: Frank Langella, “The Father”

Best Featured Actress in a Play: Jayne Houdyshell, “The Humans”

Best Featured Actor in a Play: Reed Birney, “The Humans”

Best Direction of a Play: Ivo Van Hove, “Arthur Miller’s A View from the Bridge”

Best Scenic Design of a Musical: David Rockwell, “She Loves Me”

Best Scenic Design of a Play: David Zinn, “The Humans